A second muscle to help support the body

Colorful athletic tapes have become more visible at recent world events. The tapes that support muscle movements were previously classic skin tones that were not noticeable, but now, with various colors appearing, athletes are enjoying these products as fashion. “Nitto Kinesiology Tape EX” is one such product marketed by the Nitto Group company Nitoms. Why do top athletes use “Nitto Kinesiology Tape EX”? We asked Ms. Enosawa who is active as a trainer what the secret is.

* Nitoms Co., Ltd. deals primarily with general consumer products such as cleaning products like COLOCOLO™, daily necessities such as sanitary goods and storage products, and medical and healthcare products. 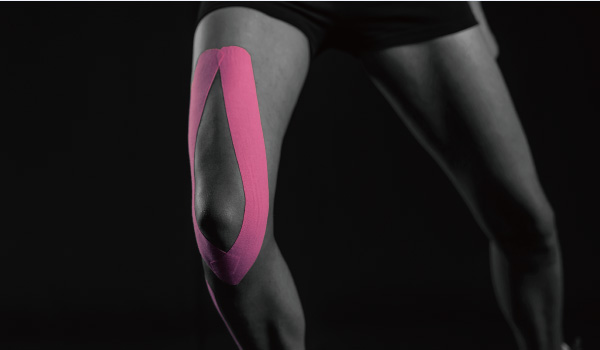 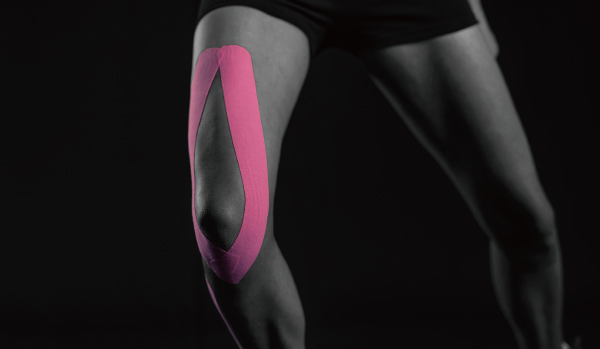 Ms. Shizuka Enosawa of K’s Trainer, Inc. trains active world-class athletes. According to Ms. Enosawa, these athletes possess acute internal sensors that alert them to even the slightest degree of muscular discomfort. The trainer’s job is to help the athletes adjust when that discomfort occurs. 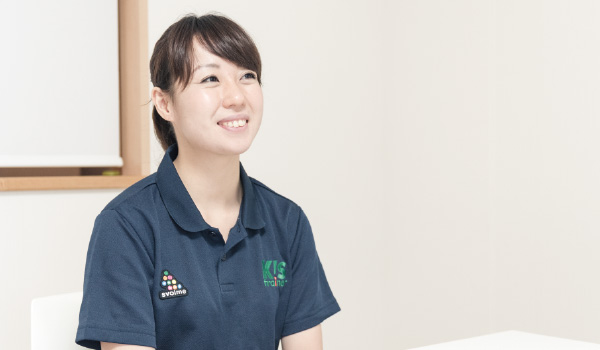 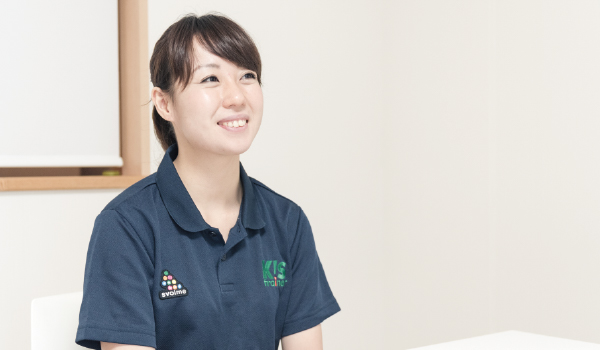 “As fatigue accumulates in intense exercises and games, athletes feel discomfort in the muscles, which leads to the result, so primarily focusing on massage to restore athlete’s muscles to their normal state. Then I apply Nitto Kinesiology EX so that the muscles that require intense movement during competition will maintain optimum condition.” (Ms. Enosawa)

The slight difference in body condition that only world-class athletes can recognize. How do they adjust such precise muscles? 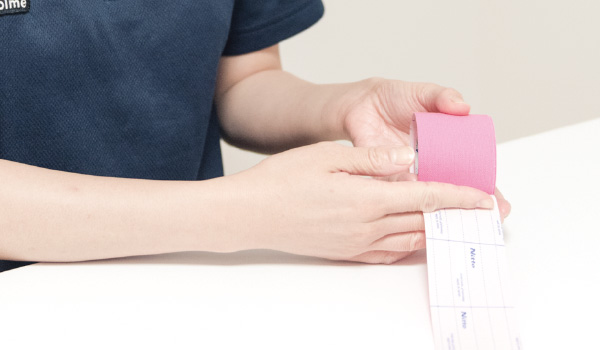 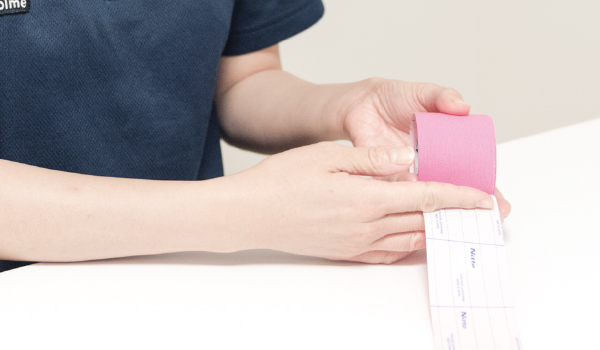 “They have a very keen sense to recognizing body condition. When applying Nitto Kinesiology EX, I adjust the method of application until they are satisfied by making small changes to the shape, length and location of application. Even so, it doesn’t lose its adhesive strength. Also, it’s gentle on the skin, so it does not hurt when removing the tape. I think applying Nitto Kinesiology EX would be welcomed by many of the athletes.” (Ms. Enosawa)

The trainer repeats applying and removing the athletic tape until the athlete is satisfied with how it feels. Although athletic tapes directly applied to the skin of such athletes need to be gentle on the skin while closely adhering without discomfort, it is also essential that the tape does not peel off during intense movements or sweating. Also, the tape needs to be able to be applied and removed many times. “Nitto Kinesiology Tape EX” is an athletic tape that top-atheletes and trainers choose with satisfication, from a number of athletic tapes.

This athletic tape is called kinesiology tape, and was developed for practitioners of the kinesio taping method. It is not used to secure joints to limit the movement of the joint. This tape is used to practice kinesiology, lifting skin by sticking tape along the muscles so it can stretch and shrink to the same degree as the muscles, and restore the elasticity of muscles that have stretched too much or contracted completely to their normal state.

Since adhesive tape is being directly applied to the skin, the product requires a high level of adhesive technology that can continue being used even after being applied and removed, as well as less effect on the skin and pain when being removed. Mr. Hamada of the Tohoku plant of Nitto Denko Corporation was involved in the development of this adhesive. 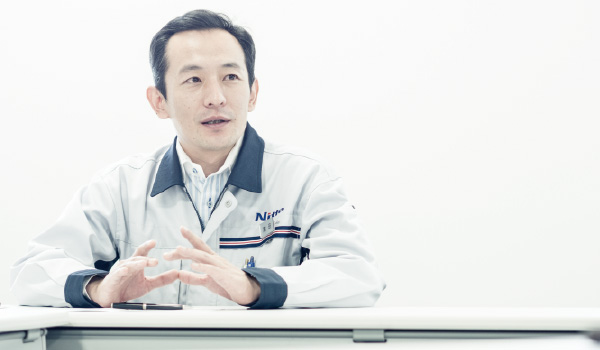 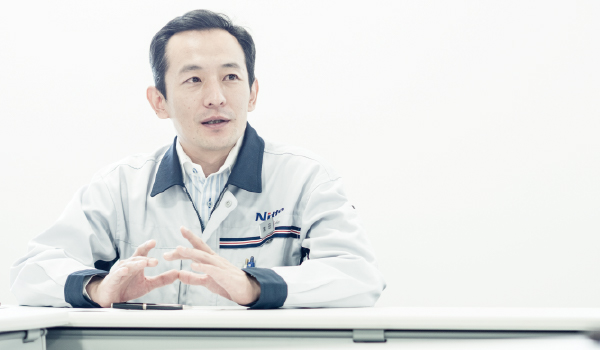 “The development of adhesives with less irritation to the skin than conventional kinesiology tapes was a highly challenging hurdle, but we had an enormous amount of material data at the time we developed YU-KI BAN® low stimulus tape for medical use. In fact, in the materials we rejected in the development at that time, was the key to the answer about the adhesive we should use for Nitto Kinesiology Tape EX. It took courage to go back along a road already traveled, but without doing so successful development would have been impossible.” (Hamada)

We finally found the answer by repeating experiments on an enormous number of combinations. We were able to develop an adhesive that was gentle on the skin and can be repeatedly applied and removed without losing its adhesive strength thanks to our vast amount of knowledge about adhesives that we had accumulated so far and the tenaciousness of our developers.

35 years since first appearing on the market,
we have continued making advances by listening our customers

“About 35 years ago we succeeded in developing a kinesiology tape, and since that time we have been steadily improving its quality while steadily advancing development. Developed by Nitto, Wave Coating technology increases breathability and reduces stuffiness.” Hatada, in charge of kinesiology tape sales, looks back on the product’s history. 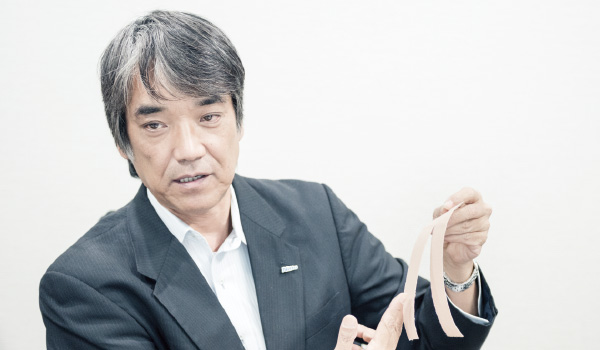 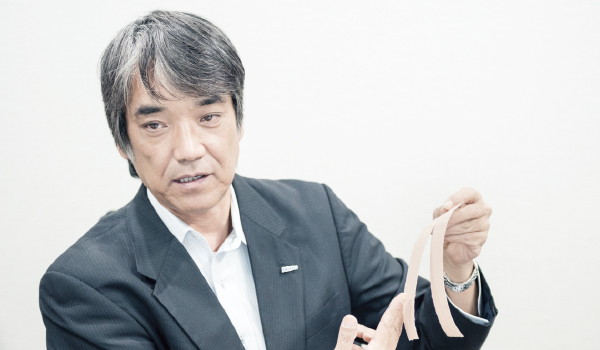 The reason for developing the new product Nitto Kinesiology EX came from the voice of consumers. When hearing the points of dissatisfaction on kinesiology tape in a questionnaire, complaints included the fact that “it causes skin rashes” and “it hurts when peeled off”. In order to solve these problems, we looked further into the characteristics of adhesive tapes, and developed a product where skin hardly sticks to the tape, in other words, it causes almost no pain. In commercializing Nitto Kinesiology EX, we carried out testing during a summer camp with the cooperation of a high school rugby team. “The players commented that the tape did not peel off even in intense sports such as rugby, stayed on even when they took a bath, and didn’t hurt when peeling off.”

And the reason we put out colored tape favored by world-class athletes, came from the voices of consumers who said they wanted a bright image because the conventional colors looked like they had injuries. This is how we kept making advances based on the needs of not only professional athletes, but the needs of amateurs and sports enthusiasts as well.

Aiming to be a “second muscle” to support human activity 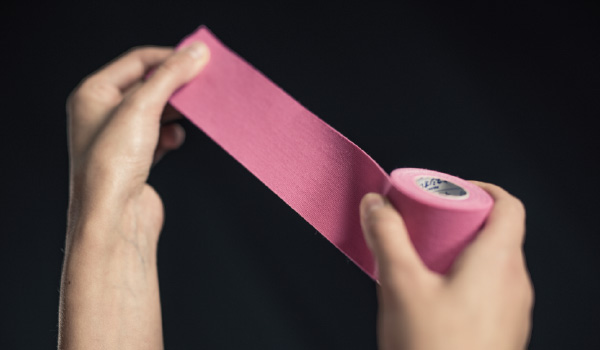 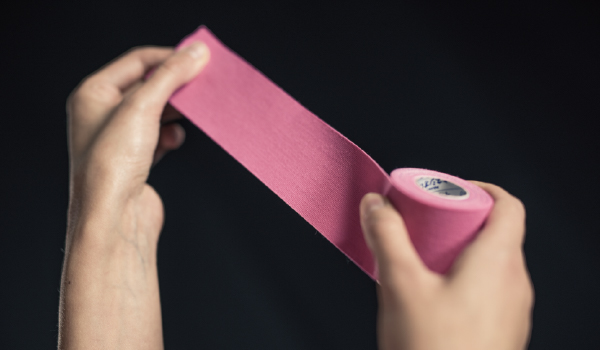 Nitto Kinesiology EX and other kinesiology tapes aim to serve as a “second muscle”. For top athletes, it has become a necessary tool for them to keep their best conditions. For those who enjoy various sports, it is also used to prevent injuries. Furthermore, it is used as a supporting tape to alleviate the pain of everyday life at osteopathic clinics and so on.
To chase after extreme records, to enjoy sports, and to simply live a normal, everyday life, kinesiology tape serves as a “second muscle” to support people’s bodies.

* The information in this article was current as of December 2016.